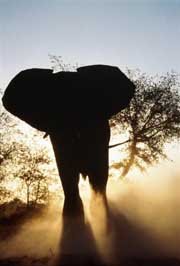 An elephant who belonged to a group of vagrant artists appeared not far from the city the people of which had never seen elephants before. On hearing of such a miracle four curious citizens decided to get permission to see the elephant before the others. As there was no light in the stall where the elephant was kept, they had to examine the strange animal in darkness.

Does it remind you something in the modern world?

Sections of the Blog